Working Moms - This One's for You

October 25, 2012
For so long I've held back on my blog because I was scared I'd lose readers and worried that I would anger someone, but I'm done with that. And in all honestly, I'm not trying to upset anyone or criticize, but let's be honest - in the never-ending debate of working vs. non-working mommies, someone's feelings are always gonna get hurt.

So let's throw caution to the wind ... working moms - this one's for you. 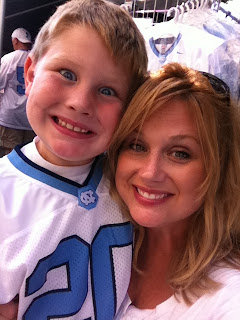 I woke up this morning, rolled over to snuggle with my little guy (yes he still ends up in the bed with me most nights) and watched as he slowly opened his eyes and smiled. He looked and me and said, "Mommie, I want waffles."

And so it goes each morning. I wake around 7:00, get Mike to warm up some waffles, or do it myself, then shower, dress...and off to school.

And it's all we've ever known.

When he was 4 months old - same thing - yep, different breakfast - no waffles then, but he was off to daycare and I was off to work.

And I don't feel guilty about it. And neither should you.

Ask my mom - I can't mentally handle being a mommie 24 hours a day one-on-one. I wasn't built that way and guess what - there are a lot of other moms like me out there as well. I can throw solutions around in the corporate office just as quick as I can have dinner on the table after picking up from after school and walking in the door. I don't get joy or pleasure out of packing the cutest lunch in the classroom and I don't feel like I've deprived my child because I wasn't there every moment of toddler-hood and he had to make friends and be exposed to germs.

Our children need some time to grow and explore without us forming this protective little bubble around them - that's how they develop character and can handle it when not everyone on the team is given a trophy at the end of the season. We can't be there to protect them when they are 20 and their college boyfriend or girlfriend dumps them or cheats on them - and boys, especially - need to be boys. They need time to be rough and tough and get bruises and scrapes - and yes, my son plays tackle football - because that's where he gets his joy. And no, I don't freak out about it.

My son and I have the strongest bond I think that could be possible. And he's so funny, and talented and smart. If I could do it all over again, I'd do it exactly the same way.

Sure, sometimes there is a tiny little twinge of guilt when he wants to know why I can't pick him up early from afterschool...but that's why I'm writing this entry. So I can go back and read it myself when I need a little pick-me-up and confirmation that I'm making the right choice.

It's 2012 - and it's ok to be a working mommie. You should be proud you can manage it all and still raise cute little guys and gals. (You remember that too Wendy)